In case you can’t fully read their chests…..the Nixon Nuts’ message for the week is, “real southern men.”

So I was excited because I got field access to this week’s Byrnes High School football game, well it wasn’t hard I just called and asked and they said ‘sure,’ but I was excited nonetheless……but can I tell you how humorous it was…..well first of all, right before I went to obtain my permission, I decided to go to the restroom because I wasn’t sure if I would be allowed to come and go from the sidelines……and as a good photographer, I carry all my most important necessities in my back-pockets….film, light-meter etc…..and not to give too many details, but I was mindful as I was pulling down my pants because I didn’t want to loose any of my important necessities from my pockets into the toilet, but I was not as mindful when I was pulling up my pants and before I had time to remember, my light meter was at the bottom of the Byrnes High School’s football stadium toilet bowl. Luckily it was early in the night so the bathrooms were relatively clean……but unfortunately the meter did not work for the rest of the night……. 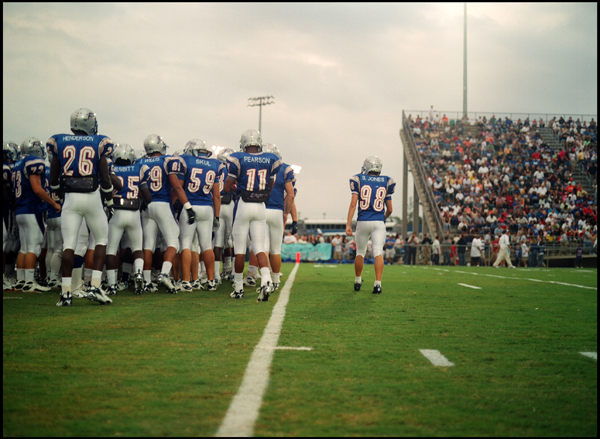 So I took my place on the sidelines with a non-functioning light meter and a camera that was made in the 50’s, and I was standing next to the sports photographers with the biggest, fastest, latest and greatest digital camera equipment.

While they were shooting on rapid fire I was changing rolls of film and trying to pretend that I was the coolest one out there because I was different……different is right. I don’t know how many editors will want to send me out to cover the sports events when I can only take pictures of people standing very very still. 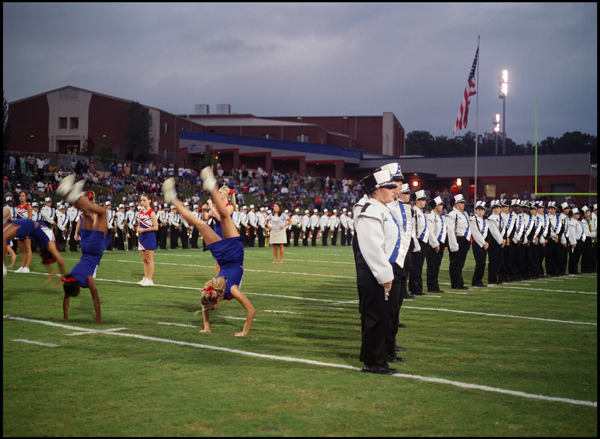 Look, there is a little bit of action in this shot…..but this is it, the rest are pretty abstract.