My best friend Lindsay, who is named after Lindsay Wagner the bionic woman, has always had an amazing talent for walking on her hands… which she has done, more times than I can count, in all the different countries and states we have lived in together.

For her 30th birthday we went trapezing in Oakland. It was heaven for Lindsay. She was by far the best in the class. She ended the party with a release-flip-hand-grab-of-other-guy-on-a-swing-flip-land. (I am sure the move has a more technical name, but I don’t know what that is.) And don’t even think you can beat her on a trampoline; she still has battle scars from beating the last person who was so bold.

Her dream is to compete on American Gladiator.

Shortly after Lindsay’s all-star performance at her birthday party, she was helping her parents clean out their garage when she found a box with old photos of muscle-ly people doing stunts on a beach. And for the first time, after 30 years of inexplicably walking on her hands, Lindsay learned she was related to a man who was a stunt double for many famous actors, including Gene Kelly, and who was a fixture at Santa Monica’s Muscle Beach, instructing aspiring acrobats who trained there… and suddenly everything made sense.

Lindsay is now writing a book about her flexible and muscle-ly long-lost relative. And because she is on a search for knowledge, we went to check out what Southern California’s Muscle Beach is like today, 70 years later.

This is what we found… 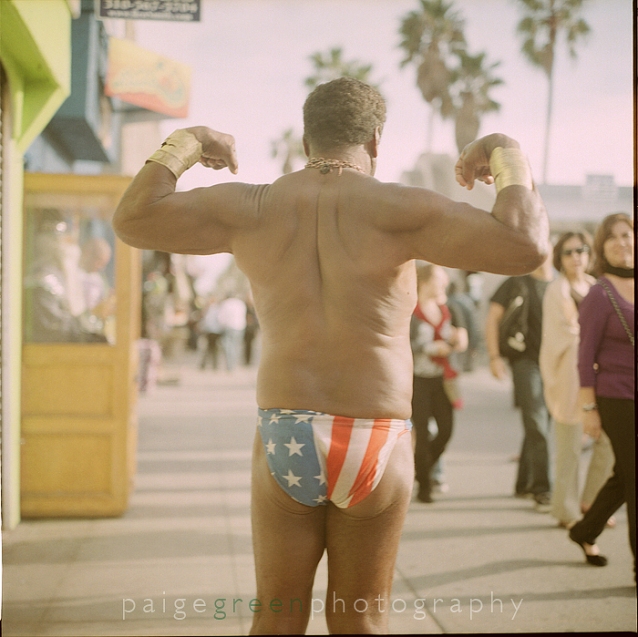 A 63-year-old hand-me-down American flag undies guy, who had more photos of himself with our dear governor Arnold, than he had teeth. He works out four times a week and it costs $2 to take his photograph… and he really wants you to take a picture of his butt. 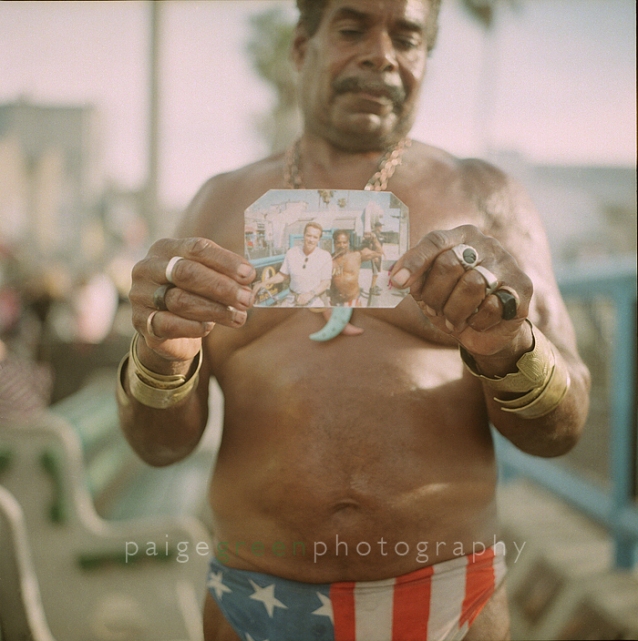 It costs $3 to take a photo with him and he gets to feel you up in the process.

But it was a small price to pay for the photo that will soon be Lindsay’s author photo in the book she is writing about her uncle.

Happy Birthday, Lindsay. I love every adventure we have together and I can’t wait to see what’s next.